LOS ANGELES – The J. Paul Getty Museum announced the acquisition of the Rothschild Pentateuch, the most spectacular medieval Hebrew manuscript to become available in more than a century. The acquisition was made possible with the generous support of Jo Carole and Ronald S. Lauder.

“The Rothschild Pentateuch will be the greatest High Medieval Hebrew manuscript in the United States, and one of the most important illuminated Hebrew Bibles of any period,” says Timothy Potts, director of the J. Paul Getty Museum. “Its richly illuminated pages – a great rarity in the thirteenth century – make it a work of outstanding quality and importance that represents the pinnacle of artistic achievement of its day. It will be one of the most signal treasures of the Department of Manuscripts and indeed of the Getty Museum overall.”

Potts adds: “It is especially gratifying that this landmark acquisition was generously supported by our Trustee Ronald S. Lauder and his wife, Jo Carole.”

Created by an unknown artist and dated 1296, the manuscript’s pages are filled with lively decorative motifs, hybrid animals and humanoid figures, and astonishing examples of micrography–virtuosic displays of tiny calligraphy in elaborate patterns and designs. The vibrant colors and gleaming gold distinguish this manuscript from most medieval Hebrew book production, which followed a largely textual tradition. It stands apart from other medieval examples through the appeal and extent of its illustrated program. The text contains features that indicate it may have been written in France for Jewish emigres who had been expelled from England in 1290. The illumination was likely completed in France or Germany.

The Pentateuch contains the central sacred text of Judaism–the Torah in the strictest sense–comprising theFive Books of Moses: Genesis, Exodus, Leviticus, Numbers, and Deuteronomy. The manuscript’s lavish illumination divides the text into sections to be read weekly so that the entire Torah would be read over the course of a year. The opening of each of the five books is celebrated with monumental Hebrew initials intertwined with lively marginal figures and, in one case, a full-page illumination.

With its seemingly endless variety of illuminated motifs ranging from the imposing to the whimsical, the Rothschild Pentateuch is a prime example of the heights of originality and magnificence that Hebrew illumination achieved and stands as the most extensive illuminated program of any northern European Hebrew Bible to survive from the Middle Ages.

In a rare deviation from the rest of the manuscript’s aniconic approach, there is one illumination featuring full human figures that was added at a later date. In the second half of the fifteenth century one page was replaced with a new insertion, carefully replicating the text and commentaries. The folio can be identified as the work of Joel ben Simeon, one of the most celebrated Jewish artists known from the period. The replacement miniature represents the sole figural narrative in the Rothschild Pentateuch, but was inspired with the same kind of ingenuity that characterizes the rest of the manuscript.

“This acquisition allows us to represent the three Abrahamic religions of the period, and for the first time brings a medieval Hebrew illuminated manuscript to the Los Angeles area,” says Elizabeth Morrison, senior curator in the Manuscripts Department. “The cohesiveness of the visual program combined with its unbounded ingenuity shows how medieval artisans approached the complex problem of page design and tackled a project as ambitious as the Rothschild Pentateuch.”

The Rothschild Pentateuch was created in 1296 perhaps for a patron originally from England. It was carried through the centuries from France or Germany to Italy and Poland, and was eventually acquired by Baroness Edmond de Rothschild at some point before 1920, and then given after World War II to a German-Jewish family, who later settled in Israel, as a part of an exchange agreement.

Adds Morrison, “The storied voyage of this manuscript follows the history of the Jewish diaspora across time and space. This newest addition to our collection will allow us to present a more inclusive story of the Middle Ages at a time when the Getty is increasingly looking to a global approach in the visual arts.”

The Rothschild Pentateuch will make its debut at the Getty Center in Art of Three Faiths: A Torah, a Bible, and a Qur’an on view August 7, 2018 to February 3, 2019, an exhibition showcasing for the first time the sacred texts of Judaism, Christianity, and Islam. The practitioners of these three faiths have been called people of the book for their shared belief in the importance of divine word, rendered in medieval manuscripts in glowing gold and luminous colors on parchment. Three spectacular examples from the Getty’s permanent collection, including a Christian Bible and a Qur’an together with the newly acquired Torah, will be featured in this spotlight show.

Monsters captivated the imagination of medieval men and women, just as they continue to fascinate us today. Drawing on the Morgan’s superb collection of illuminated manuscripts, this major exhibition, the first of its kind in North America, will explore the complex social role of monsters in the Middle Ages. Medieval Monsters will lead visitors through three sections based on the ways monsters functioned in medieval societies. “Terrors” explores how monsters enhanced the aura of those in power, be they rulers, knights, or saints. A second section on “Aliens” demonstrates how marginalized groups in European societies—such as Jews, Muslims, women, the poor, and the disabled—were further alienated by being figured as monstrous. The final section, “Wonders”, considers a group of strange beauties and frightful anomalies that populated the medieval world. Whether employed in ornamental, entertaining, or contemplative settings, these fantastic beings were meant to inspire a sense of marvel and awe in their viewers.

The Museo del Prado in Madrid, Spain is collaborating with the Real Academia Gallega de Bellas Artes and the Fundación Catedral de Santiago to present an exhibition on Master Mateo and his work for the cathedral of Santiago de Compostela. The exposition  “Master Mateo” will be running in Prado starting on November 29 to March 26, 2017.

For the first time, a selection of sculptures, normally housed in the Cathedral in Santiago outside the Porch of Glory  and in various other institutions and collections, brings together works by this artist that were part of now lost groups or from parts of the cathedral that no longer exist, such as its medieval façade and the stone choir that occupied the nave.

Master Mateo (c. 1150 – c. 1200 or c. 1217) was a sculptor and architect who worked in medieval Christian kingdoms of the Iberian Peninsula during the second half of the twelfth century. He is best known now for the Pórtico de la Gloria of the Cathedral of Santiago de Compostela. He was also responsible for the stone choir of the cathedral in 1200, later torn down in 1603.

The earliest information about the artist is from an 1168 document in the archives of the cathedral of Santiago, which says that the Master was already working on the Cathedral of Santiago de Compostela, for which he received a large sum of money from King Ferdinand II of León. Very little information remains about his early training, but everything seems to imply that he already had a long career behind him all along the Way of Santiago, especially in the French sections.

The natural sized sculptures highlights of the upcoming exposition are divided between public and private institutions: two of which can be found at the Pontevedra Provincial Museum, a further two at the Cathedral Foundation and another three are in the hands of private collectors. These pieces include David and Salomon, which can be seen on the Obradoiro façade; Abraham and Isaac, from a private collection; and Enoch and Elijah housed in the Pontevedra Museum, dating from 1188 and 1211. 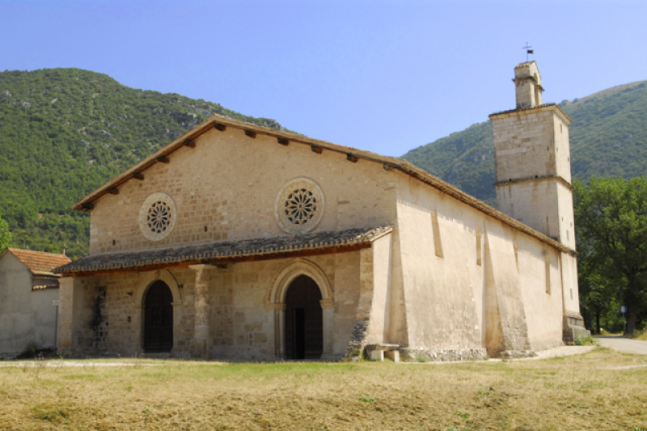 The beautiful medieval church of St. Salvatore di Campi di Norcia,  Umbria, almost completely collapsed. Below are some dramatic images of the church, before and after the strikes.

The epicentres were near the village of Visso, located on the edge of the region of Marche close to the border with Umbria. Visso is just 70 kilometres (45 miles) from Amatrice, striked by a powerful earthquake last August,  and also not far from L’Aquila where another tremendous event killed more than 300 in 2009. 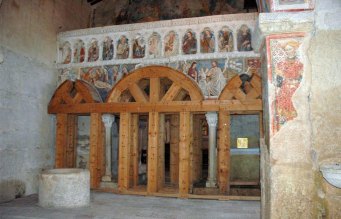 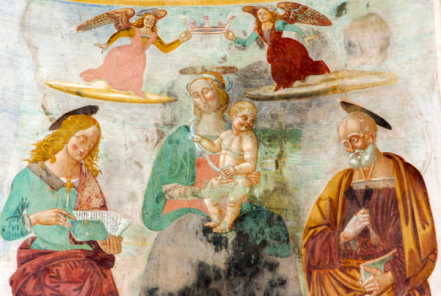 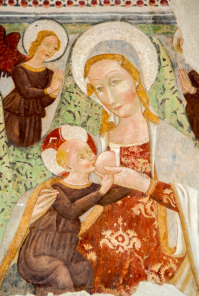